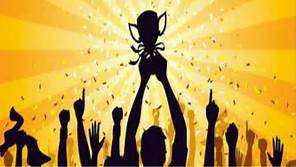 If not then you are definitely missing out!

Maybe you are uncertain about what happens. I went along for the first time this year and can tell you exactly what to expect.

On Thursday 6th April the Jura Sports Hall played host to this year’s Secondary School Sports Awards. The ceremony, presented this year by Lucas Navarro and Lara Griffiths is organised and hosted by Year 12 students who form the Sports Committee and this year they put on an excellent show. There are currently over 1000 students involved in competitive sports and teams from basketball, netball, football, rugby, track and field, cricket, gymnastics, volleyball and cross foundation ski all came together to celebrate a variety of success in events at home and all over Europe.

The evening began with food and drink and an opportunity to catch up. Once seats were taken the teams were all clapped and cheered into the hall.

The guest speaker this year was Howard Gayle, the first black footballer to play for Liverpool.He spoke brilliantly about the importance of teamwork and practise before handing out the awards to the winners.

After this all teams and their coaches were invited on stage and their captain spoke about their achievements before the awards were presented for best sportsmanship and best player. We saw the football team’s “mannequin” video, watched an amazing video by the gymnastics team and were treated to an example of the rugby team’s celebrations.

Special mentions were also made to some of the team parents who provide never ending support to their respective teams – Catherine Lewis, Jo Hartley, Gerald Lechault, Paul Given, Michael Buch, Anna Fabri and Jackie Williams.

There were also big cheers for the wonderful Jonanne Lohr and Emma Calcutt without whom none of this would happen!

The final awards of the night were presented to Overall Female, Overall Male and Overall Sportsmanship. Won by Hazel Ferguson, Adrian Wessendorp and Rosie Ashworth.

All in all an outstanding evening with lots of deserving winners very well organised by the Sports Committee of Grace Beesley, Cenydd Young, Kara Koopman and Eileen Hahn.